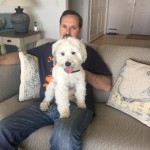 I grew up in a different era.
When I was a kid, dogs walked around freely in the neighborhood and nobody ever picked up after their dog, yet somehow we survived and everyone seemed to be a little happier and less stressed than we all are today.
Now there are strict leash laws and the neighborhood Poop Police patrols the streets, watching to make sure that people pick up after their dogs.

I walk my girlfriend’s dog on a regular basis and I love that dog like you can’t imagine… but I can’t tell you how much I hate swallowing my pride and suffering the indignity of stooping down to pick up his squishy dog shit in a plastic baggie, then carrying it around with me everywhere I go… like I’m bringing warm leftovers home from a restaurant.
Don’t fool yourself… no one likes to do it… no one wants to do it, but we are all shamed into doing it… and what a humiliating experience it is.
I never had kids of my own and not even once in my lifetime have I ever had to change a dirty diaper… for either an infant or the elderly. I’m perfectly good with that on my resume and I’d like to keep my record intact, thank you.
It’s not an accomplishment that I’m looking to check-off on my Bucket List… if you know what I mean.
Hell, let’s be honest, I don’t even like to wipe my own ass!
But now I am supposed to pick up after a pet?
If you haven’t enjoyed this delightful experience, just imagine standing up in the middle of Thanksgiving dinner, shoving your hand into the bowl of hot mashed potatoes, and stuffing a fistful of ‘em into a Ziploc sandwich bag.
“Excuse my reach, mom…”
And just to illustrate the absurdity of the rules in the first place, I was recently down on the commons, next to the lake in my hometown, and I saw a police officer issuing a citation to a man who hadn’t picked up after his pint-sized pug.
Meanwhile, less than fifty feet away from the scene of the crime, at least sixty or seventy geese were defecating all over the lawn like a flock of Golden Retrievers!
I wanted to offer my services as a lawyer and represent him in an appeal to the court.
I’d make them put the offending poop into a line-up and ask the officer positively identify the offending poop during cross-examination.
“Officer, can you confidently distinguish my client’s dog’s droppings from this array of randomly selected stool samples from various dogs and geese?”
“Ahhh, no. Of course not… Shit’s shit… They all look the same”
“No further questions, your honor.”
“Case dismissed. Call the next matter.”
As it is, I sometimes I wonder who’s really the boss in my relationship with the dog.
I’ll take him out to a park, toss a tennis ball across the field and yell, “Fetch it boy! Fetch the ball! Pick it up! Go get it! Be a good boy and fetch the ball and bring back it to me!”
Sometimes he’ll do it… but other times he’ll make absolutely no effort to chase the ball and will not budge… then he’ll lower his hind legs, drop his butt down, and stare up at me, as if to say…
“No, I don’t feel like fetching that ball for you today… but you know what?… grunt… Here’s a little steamy something I’m gonna leave for you to fetch… grunt… OK, pick it up. Go get it! Fetch my poop… There you go. Good boy! You’re such a good boy, Paul…. Who’s a good boy?… Now bring it back home.”
At least our dog is little and only does small ones… like baby Tootsie Rolls.
Sometimes it’s just one Tootsie Roll, and then he’ll squeeze out another tiny little ‘Hershey’s Kiss’ at the end, like a period punctuating the end of an exclamation mark.
Kinda cute and innocuous… and hardly a major threat to the neighborhood.
But I see people walking these big German Shepherds and giant Great Danes and humongous Saint Bernards and the first thing I will say to myself is, “Oh my God! Their shit has to be enormous!!”
I’d need to be driving a Bobcat front-end loader and wearing a biohazard suit to pick that nasty load up… along with a Hefty Double-Strength Leaf and Lawn Bag to put it in.
Then I could throw that big sack full of goodies over my shoulder and lug it around like I’m Santa Claus delivering gifts to really bad kids… when a lump of coal just won’t do the trick. 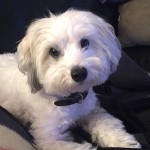 There have been times when I have left the house without bringing the plastic baggie with me, as absent minded dog owners will do from time to time… and what dog owner, at one time or another, hasn’t bent over and channeled their inner Meryl Streep or Robert Downey Jr., pretending to pick-up after their dog?
If you are saying, “Oh no, not me, Paul,” then you lie like Hillary.
But it’s even more of challenge to simply just try to get away with it.
And why not? After all, it’s just a matter of perspective.
One man’s ruined sneaker is another man’s compost.
If you don’t believe me, go to any Home Depot or garden center in the country… They put the stuff in big bags and make money selling it to people.
I have it down to a science.
Sometimes I’ll wait until it’s dark outside, preferably on moonless nights, so no one can identify me or see what the dog is doing… plus, I dress the little white dog in a little black ninja suit, with a little black hood that covers his head, and I’ve obliterated the serial number on his dog collar.
Other times I’ll walk him in the woods where there aren’t any people around.
And also, the last time I checked, all of the deer and coyotes and raccoons and squirrels and chipmunks and skunks and possum and bears and foxes and wild beavers who live in the forest aren’t picking up after themselves… so I’m not either. 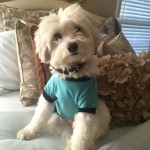 I’ll even tuck a plastic bag in my belt so it looks like I intend to pick it up, even though I have absolutely no intention of doing so… always in a bright color to draw the attention of the Pick-Up-The-Poop-Patrol, like a shiny fishing lure would attract a mackerel.
In fact, I’ve often carried around the same plastic bag for about a month without using it, riding on my hip like a handgun packed into a holster… figuring that, much like a firearm, it was better to have it and not need it, then to need it and not have it.
If we happen to be walking down a busy street and the dog starts to ‘go’ while another person is walking towards us on the sidewalk, or cars happen to be driving by, I will give his collar a little tug and interrupt him before he puts me on the spot.
“Sorry, Duffy. Not now… Squeeze it. Squuuuueeze it shut, boy… We can’t have any witnesses. You just have to hold it until they pass… That a boy. Good boy… I’m sorry. I’m realllly sorry, my little friend… wait… wait…just s sec…
“OK, she’s gone… Do your business.”
Still, it’s tough to get away with it… so this is what I do now.
Before I take the dog for a walk, I’ll drive down to the neighborhood Dunkin’ Donuts and get myself a cup of coffee and a chocolate cruller.
I put the chocolate cruller into a plastic baggy… then I proudly and prominently carry it with me when I am walking the dog.
To passers-by, it looks just like I’m carrying a bag full of puppy poop.
Everyone in the neighborhood thinks I’m a hero.
And, when I get home from the walk, I have myself a tasty little snack.
Problem solved.
Hallelujah.