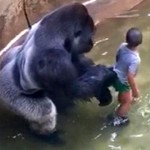 There is no such thing as ‘personal accountability’ anymore.
In May of 2016, a three year old boy was visiting the Cincinnati Zoo with his mother and father.
This little boy somehow, someway, ended up inside the gorilla exhibit alongside a wild, 450 lb. gorilla.
As a result, sharpshooters had to shoot and kill the rare, endangered silverback gorilla in order to save the boy’s life.

It didn’t take long for hordes of politicians and lawyers and activists and victim’s rights groups and journalists and talk show hosts to ask…
“Who is responsible for this near tragedy?”
“Was it the fault of an inadequate or faulty cage?”
“Were there undetected design flaws in the construction of the enclosure?”
“Did the pen lack sufficient safety features?”
“Was there sufficient security and were those guards properly trained?
“Was there something more the zoo could have done to prevent this from happening?”
These blowhards were starting to make me go ape-shit, so I looked it up…
The Cincinnati Zoo opened in 1875, which is almost 150 years ago.
Approximately 1.5 million people visit the Cincinnati Zoo every year.
Using those figures, that’s well over 200 million visitors who have visited that zoo in the last century and a half… or, to put it into perspective, about 2/3 the current population of the entire United States of America.
That’s one hell of a lot of people.
In 2016, one kid fell into the gorilla cage and everyone flipped out.
In their scramble to assign blame, these idiots were losing sight of the fact that, over the last one hundred and fifty years… roughly 199,999,999 people did NOT end-up accidentally holding hands with an untamed, 450 lb. primate, inside a formidable cage that was specifically designed and constructed to keep dangerous animals away from people… and visa-versa.
The cage was secure enough to keep 199,999,999 people out.
I don’t know about you, but I think that’s a pretty damn good safety record.
Is there really something wrong with the enclosure?
Or was it just a perfect storm of unrestrained curiosity… bad judgement… ignorance… neglect… and a series of massive brain-farts that caused this to happen?
Was the zoo negligent?
Or was it just the right mix of a pair of one terribly careless set of parents in combination with one incredibly stupid offspring?
On the video you can hear a woman screaming…
“Mommy’s right here! Mommy loves you!”
Apparently, not quite enough to keep an eye on her little “Tarzan in-training” kid in a crowded park filled with menacing animals and infinitely more menacing humans.
Wow! Way to go! Congratulations! You should be very proud of yourselves!
Your kid is special… He’s the only child, out of millions and millions and millions and millions and millions and millions and millions and millions and millions of other children, of all different shapes and sizes, backgrounds and educations, intellects and disabilities, ages and colors… who ended-up in the fucking gorilla cage!
Your parent and child team overcame insurmountable odds, and breached seemingly impassable obstacles, to win a face-to-face meeting with King Kong’s not-so-little cousin and getting him killed for just minding his own business and acting like the animal that he is/was!
Now, all because of these soft-as-shit parents and their equally soft-as-shit, “chip off the ol’ block” kid, the zoo doesn’t have a gorilla anymore… and all the other kids and zoo visitors will have to suffer for it.
The boy’s too young, so maybe we shouldn’t to punish him for monkeying-around.
Just be patient.
I have a gut feeling that the public won’t have to wait too many years before we are all entertained with a You Tube video of this numbskull getting ripped to shreds when he attempts to cuddle a crocodile, slow dance with a Great White Shark, or ‘spoon’ with a Grizzly Bear.
But his parents should be reprimanded for their role in this.
That’s why I think they should make the mother and father dress up in gorilla suits and put them in the cage until the zoo can get a replacement gorilla.
That can be their way of giving back and, if another kid is ever dumb enough to find a way into the cage, and a swat-team sniper is lining up a kill shot, stunned zoo patrons and horrified children will hear the gorilla screaming at the top of his lungs…
“PLEASE, DON’T SHOOT ME! I’M NOT GONNA HURT HIM!
“I AM NOT A REAL GORILLA! MY NAME IS TED!
“I’M JUST A BAD PARENT BEING TAUGHT A LESSON!… HOLD YOUR FIRE!”
If you ask me, all this monkey-business is fucking bananas.