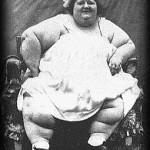 Summer is traditionally the peak season for movies, when all the big-budget blockbusters are released, but I don’t go out to the movie theaters as much as I used to.
Why is that, you ask?

Well, to answer your question, now that I have a high-definition, wide-screen television and Home Theater Surround-Sound, sometimes it’s just easier to stay at home and watch a DVD or rent a movie ‘On Demand.’
Think about it… It’s cheaper…You can pause the movie whenever you want…You can take a break and have a snack…You can take a leak without bothering anyone… You don’t end-up missing important parts of the movie… and most important of all, you don’t have to put-up with the other people in the theater.
You see, the last time I went to the movies I had a bad experience.
I went to see this big action movie with my girlfriend and there was a woman sitting in my row of seats who was extremely large. I mean, she realistically had to have been pushing upwards of 350-400 lbs.
Now God bless her, I’m not judging her… and, honestly, I kinda felt bad for this woman. Besides, her life choices are really none of my business. Live and let live…
But all I ask in return is to please reciprocate, leave me be, and don’t make MY life miserable.
Not long after the movie started, this woman got up and began making her way down the aisle.
I knew she was coming towards me because I could hear people yelling as she stepped on their feet.
“Ow!”
“Hey! Watch it!”
“Ouch!”
Now those are very narrow aisles between the seats and it’s tough enough for a normal sized person to get through, but a woman of that size was obviously having some serious difficulty getting by.
Then she got to me and tried to cram her enormous body past my seat.
I assumed the fetal position and tucked my legs up onto my chair to give her room, but trying to squeeze past me was like trying to jam a meatball into a piggy-bank and the lady somehow got wedged in between me and the seat.
I was just trying to watch a movie and she was taking such a long time to get past me, it was like waiting for the Queen Mary to pass by.
“Excuse me.”
(the ear-splitting blast of a cruise ship’s horn) ARRRRRRRRRRRRRRRRRRRRRRRRR!
“I’m so sorry.”
ARRRRRRRRRRRRRRRRRRRRRRRRR!
It took forever for her to struggle past me and her body blotted out my view of the screen so that I couldn’t see the movie.
A little while later, I saw her coming back to the seat, covered my mouth and whispered into my girlfriend’s ear, “This woman is gonna make me miss half the damn movie!”
She whispered back, “Relax, it’s not a big deal.”
I said, “You’re right, it’s not a big deal, it’s more like a total eclipse of the movie screen, and I’m starting to get pissed.”
She said softly, “Calm down, Paul.”
“Calm down? I paid twelve bucks for my ticket and… no, wait a second, I paid twenty four bucks for these two tickets, and all I want to do is watch the stupid movie without being interrupted. Is that asking too much?”
The woman approached me and said, “Excuse me. May I get by?”
I had a couple responses in mind, including…
“You may get by… but I’m not so sure you can get by.”
And my personal favorite…
“I came here to watch the movie, not the crack of your fat ass every five minutes.”
But I was very polite and respectfully said, “Don’t worry, ma’am, it’s no problem.”
“Thank you.”
ARRRRRRRRRRRRRRRRRRRRRRRRR!
Again she got hung-up directly in front of me and it was extremely awkward.
“Oh, I’m so sorry.”
ARRRRRRRRRRRRRRRRRRRRRRRRR!
She eventually got by, and I eventually calmed down, and a while later I was really getting into the movie, when it came to the one part that I had been waiting to see.
I leaned over and whispered to my girlfriend…
“OK, we really need to pay attention now. I heard about this. This scene coming up is the one that everyone has been talking about. It’s supposed to be amazing! You don’t want to miss this.”
And that’s when, out of the corner of my eye, I saw her getting-up from her seat again.
I said to myself, “Oh no, not now, lady… Please don’t do this to me!… Awww, here she comes, dammit… Here we go again.”
“Excuse me.”
“Ouch!”
“I’m sorry.”
“Ahhh! My foot!”
“Pardon me.”
“Careful lady! That hurts!”
She eventually reached me…
“Excuse me.”
Under my breath I said, “Ya, I know the drill,” as I drew my legs back and scrunched myself up as small as I possibly could in my seat to let her go by.
ARRRRRRRRRRRRRRRRRRRRRRRRR!
Now here’s my gripe…
When this woman started to squeeze her way by me, on the movie screen was a typical family of four, sitting around a typical dinner table, in a typical house, in a typical suburban neighborhood, having a typical family conversation…
“How was your day?”
“Great, and yours?”
“Do you kids have homework to do?”
“Can you please pass me the butter?”
Then…
(another blast of the mighty ship’s horn) ARRRRRRRRRRRRRRRRRRRRRRRRR!
And, by the time this woman finally was able to make her way past me and I could see the movie screen again, the house was on fire, there were several dead bodies on the front lawn, and a helicopter was shooting rockets at a big, black limousine that was burning rubber as it peeled-off down the street at breakneck speed.
“Oh no! What the hell just happened? What did I miss?… I can’t believe I just missed everything!”
… and THAT’S why I prefer to watch movies at home.