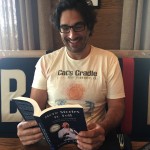 ‘Who’s Reading My Book?’ #35 features my good friend, stand-up comedian Gary Gulman. Gary is originally from Peabody, MA and now lives in New York City. He graduated from my alma mater, Boston College, with a degree from their School of Management, like me. 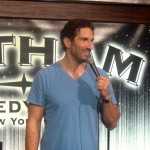 Gary was a finalist on NBC’s ‘Last Comic Standing’ in seasons two and three, and was featured in Dane Cook’s ‘Tourgasm’ series that was on HBO, along with Dane, Jay Davis and Robert Kelly.
He has made multiple stand-up appearances on The Tonight Show with Jay Leno, The Late Show with David Letterman, Conan, and Jimmy Kimmel Live!, as well as The Late, Late Show with Craig Ferguson, Late Night with Seth Meyers, and John Oliver’s New York Stand-Up show.
Gary also wrote and starred in two one-hour Comedy Central specials, ‘Boyish Man’ and ‘In This Economy.’