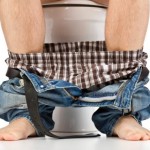 People often repeat traditional phrases that have been handed down through generations without really thinking about what they’re actually saying.
If they did, they might realize how ridiculous some of these expressions sound.
“It’s raining cats and dogs.”
“No skin off my nose.”
“I got it straight from the horse’s mouth.”
When I was living in L.A., I was hanging out with a couple of my buddies one evening when, all of a sudden, my friend Max left in a big hurry without saying a word.
The next time I saw Max I asked him, “Where the hell did you go the other night? You just disappeared. Mitch said he saw you make a run for the door.”
Max said, “I’m sorry I took off without saying goodbye, Paul, but I had to take a shit like you read about.”
Really?
“… a shit like you read about?”
Can I ask a question?
I’m curious. Exactly what kind of publication would report such a story?
I didn’t see anything about it in the morning newspaper the following day.
What sort of magazine would feature an editorial discussing the intimate details of Max’s bowel movement?
Is there a periodical called Squirts Illustrated that I don’t know about?
Popular Poop? Better Homes and Thrones? Readers Digestive?
Perhaps it was a feature article in Big-Dump Monthly… ‘Read All About It! Max Maxes Out!’
Or maybe I missed it in the ‘letters and feedback’ segment of Modern Toilet-Sitter, The Gastronomical Gazette or B.M. Enthusiast.
Could Max have discussed his log in a blog?
Or on Twitter while on the shitter?
Or maybe he posted the account of his bathroom escapades on Fecesbook.
Enough?
I don’t want to beat a dead horse because there’s no use crying over spilled milk but, make no bones about it, as a rule of thumb you can’t shit your cake and read about it too.