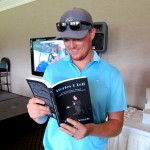 ‘Who’s Reading My Book?’ #27 features Cory Schneider, the starting goaltender for the NHL’s New Jersey Devils
Cory grew up in Marblehead, MA and graduated from Phillips Academy in Andover, MA.
He was a first round selection in the 2004 NHL Entry Draft, taken #26 overall by the Vancouver Canucks. 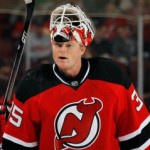 Following the draft Cory attended Boston College (my alma mater!) and led the Eagles to two Hockey East championships, as well as two appearances in the NCAA Frozen Four. He has also won gold and silver medals while representing the United States in various junior level competitions.
In 2007 Schneider turned professional with Vancouver’s AHL affiliate and was named the league’s Goaltender of the Year the following season.
In 2010-2011 he was called up to become Roberto Luongo’s back-up with the Canucks, setting the Canucks team records for goals against and save percentage in his second NHL season.
In 2013 Cory was traded to his current NHL team, the New Jersey Devils. He began as perennial All-Star Martin Brodeur’s back-up, but became New Jersey’s starting goalie when Brodeur left as a free agent before the 2014-2015 season.
See why everyone is reading and raving about Paul D’Angelo’s hilarious new book ‘Stories I Tell,’ a global Gold Medal Winner of the 2015 eLit Book Awards, a Finalist in the 2015 International Book Awards and voted Honorable Mention in the 2015 New York Book Festival..
You can buy the book at Paul’s web-site: www.pdangelo.com
or on Amazon.com at Paul’s author page: http://amzn.com/069229435X