Alfred, one of my very closest friends from my early childhood, ended up going to Boston College with me after we graduated high school. We stayed best of friends over the years and I eventually became the godfather to his son, Alex.
While we were attending college, neither one of us had any money to our name, but Alfred had a passion for cars and worked several side jobs so that he could afford to customize a Plymouth Duster that he bought with the money he had been saving for years. 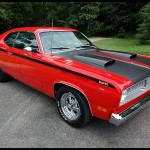 Al really loved this car and put his heart and soul into it, working on the project in his garage whenever he could find any spare time between school and work.
He bought an expensive set of beautiful, custom chrome wheels and, upon them, mounted some seriously fat tires with raised white lettering that looked very cool.
Al beefed up the suspension, installed some heavy-duty gas shocks, and added a set of Cherry-Bomb mufflers that produced a deep, throaty rumble and sounded the balls.
He rebuilt the engine and added headers, which increased the horsepower, and also installed a premium sound system.
Al kept the car’s shiny, bright red paint polished and glistening, and he was constantly detailing both the exterior and interior, so the Duster always looked like it just came out of the showroom.
That car was Al’s pride a joy and the envy of many of our automobile enthusiast friends.
One warm, spring day Al and I finished up classes at BC and were walking together from the upper campus to the lower parking lot, half-way down an extremely long set of stone steps on the side of a steep hill, when we heard the approaching, guttural growl of a custom exhaust system that immediately got our attention.
Half way down the endless staircase, we saw a good looking, red sports car coming into view in the lower parking lot and Alfred said, rather matter of factly,“Wow, that’s really a nice car… and it looks a lot like mine.”
There was a short beat before his eyes suddenly widened in recognition and Al screamed out, “WAIT, THAT’S MY FUCKING CAR!” and started running as fast as he possibly could down the stairs, leaping two or three steps at a time, with me following right behind him.
We got to the bottom of the stairs just as the car drove past us with two black guys sitting in the front seat.
Al ran right towards them, waving his arms wildly and yelling at the top of his lungs, “STOP, YOU ASSHOLES! YOU’RE STEALING MY FUCKING CAR!” but the two occupants just looked at him, laughed, smoked the tires, and took off at a high rate of speed towards the city of Boston.
We were both huffing and puffing from our frantic run down the stairs as my good friend, Alfred, watched his prized possession disappear out of sight with an abject look of horror and dismay on his face, his mouth hanging open in utter disbelief.
You can’t imagine how incredibly bad I felt for my friend, because I knew how much hard work, hard-earned money, valuable time and sacrifice he had put into that car, and I could empathize with how absolutely devastated he must be feeling at that moment.
If Alfred ever needed the support and sympathy of a friend, this was certainly it.
But what do you say to someone under these devastating circumstances that could possibly be of any help?
How do you comfort a close friend who has just suffered such a heartbreaking loss?
What words could one possibly come up with that might help soothe the enormous pain that my pal was suffering after his cherished car was stolen right in front of his eyes?
This…
I put my arm on my poor, distraught friend’s shoulder, looked right into his teary eyes, and said, with great sincerity and compassion…
“Don’t worry, Alfred… I got the license plate number.”
He couldn’t help himself and burst out laughing.
After all, that’s what friends are for.