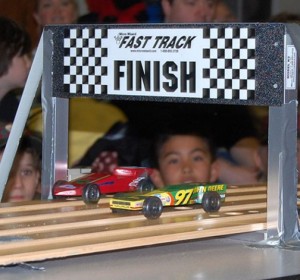 My brother Jay’s has an adorable son who is nine years old and he has been in the Cub Scouts for a few years now. It’s really a great organization for the kids to get involved with.
Every year the Cub Scouts hold this big event that they call the Pinewood Derby and it’s the highlight of the year for a lot of these young boys.
This is what the Pinewood Derby is all about…
Every scout is supposed to build his own race car.
Each kid starts with a block of wood, four wheels and a few nails.
After the Cub Scouts build their cars they have a competition and the scouts race these cars down a track. The kids go through all these elimination rounds and they have official time clocks and photo finishes… it’s really a big deal… and then they give out trophies at the end to all the big winners.
My brother had the day of the big race circled in red on his calendar for months.
His son Jack did great last year, but he just missed out finishing in the money, and my brother was intent on doing better this year.
The week before the race, my brother spent several long nights down at his workbench in his basement of his house… sometimes late into the early morning hours, like Doctor Frankenstein working on his creature in his laboratory… carving and sanding smooth the wooden body, making it as aerodynamic as possible… using all sorts of Dremels and hand tools and power tools… trying to get the sleek shape just right… just perfect.
My brother also lowered the car’s center of gravity, delicately filed any slight imperfections from the axles, and then lubricated them in order to reduce drag and friction and increase speed.
He experimented with different designs and distributed the weights in the optimal manner in order to achieve maximum performance.
He carefully painted the body, over which he applied all these cool racing stickers… and then he sprayed two layers of clear coat over that.
He continually weighed and measured the car to make sure it was still within the acceptable limits, which are strictly enforced, and then he waxed the car one more time to make it extra slick.
His son?
His son didn’t do one thing to help build the car.
He didn’t spend a single minute in the basement working with his father.
He contributed nothing whatsoever to the fabrication of that car.
In fact, the whole time my brother was in the basement busting his ass working on the car, his kid either was sitting on the living room couch playing videogames or was mesmerized in a techno-trance, staring at his iPod.
OK, so now it was the day of the races…
I went… and this is what I saw.
I saw my nephew and all the other little Cub Scouts, from all the different troops, from all the different towns, all standing around on the sidelines, all throughout the afternoon… watching a bunch of adults race all of the cars that all of the kids’ fathers had built for all of their little sons.
Hmmm…
Well, wouldn’t you know it, at the end of the day they tallied-up all the times by computer and my little nephew’s car came in second place overall. They held a little ceremony and my nephew was awarded a very nice trophy, so we were all extremely happy for him.
As we were walking out of the big hall, my brother said to me, “You know, I’m really proud of Jack for coming in second place. That’s quite an accomplishment. There were an awful lot of entrants here today.”
And I said, “No, no, no… Jack didn’t come in second place,” pointing my finger at him, “YOU came in second place!… Jack didn’t have a thing to do with that car.”
“Well…”
“No, the truth is, you came in second place to some other kid’s father who also spent most of the week in his basement, at his workbench, building his kid’s race car for him, just like you did.”
That’s when my bother threw his hands up and vented…
“It’s just not fair…. I heard the father of the kid who won is like some kind of scientist or engineer or something…They say he used special alloy axles that he had imported from Europe.”
“Are you kidding?”
“Am I kidding? The guy built a wind tunnel in his garage for testing! Who the fuck builds his own wind tunnel?”
“No shit.”
“Yes, and the prick probably got Mario Andretti or maybe fuckin’ Dale Earnhardt Junior to personally chop down some exotic tree in South America to get rare wood for the car…”
“Calm down, Jay.”
“No. Wait until next year! I know what I have to do! You’ll see! I have a few tricks up my sleeve for that bastard! Heh, heh, heh… ”
It’s Alive! The monster… LIVES!