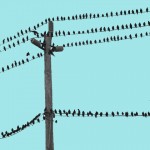 Birds on a Wire
Animals are better than human beings.
Have you ever seen hundreds and hundreds of birds perched side-by-side on a telephone wire?
You’ll notice that they are all getting along peacefully… balanced in harmony on a thin chord stretched between two telephone poles.
Humans could never, ever get along like that.

Right away, many of the people would accidently fall off of the wire because they’re totally mesmerized by whatever happens to be on their cell phones and are totally oblivious to the world around them.
Environmentalists will condemn the wire as an affront to the earth and will do everything they can to have it taken down… even if it comes at the expense of the people who are on it.
All of the drunks and drug addicts would be falling off the wire, instead of falling off the wagon.
Fights would break-out between the Arabs and the Jews … the blacks and the police… … the feminists and the pro-lifers… the haves and the have-nots… Red Sox fans and Yankee fans… knocking even more people off of the wire.
The hawks and the doves would be fighting over whether or not they should fight.
Terrorists would be constantly trying to find new ways to cut the wire and kill everyone on it.
Illegal aliens would be sneaking onto the wire at one end, crowding everyone who had originally been there, down at the other end of the wire.
The Democrats would be trying to push all the Republicans off the wire to make more room for the illegal immigrants.
The Republicans would be desperately trying to shove the Democrats off the line before they ruin the wire for everyone else.
The liberals would be trying to take away space on the wire that others had worked hard for, and redistribute it to those who did absolutely nothing to earn the perch for themselves, but feel it’s owed them.
The conservatives would be trying their best to shake-off those illegal aliens that are overrunning the other end of the wire.
Donald Trump would be looking to buy the wire and convert it into a very narrow, multi-story office building.
Hilary Clinton would deny that there is a telephone wire, or ever was a telephone wire, even though it’s painfully obvious to everyone that she’s balanced upon it as she’s speaking.
The mainstream media will back her up.
Bruce, now Caitlyn, Jenner will have a difficult time deciding if he/she should stand on top of the wire, or dangle from it.
Underachieving kids who fall off on their own, because they’re too clumsy to stay on the phone line, will be given participation trophies anyway to celebrate their failure… thus perpetuating the problem.
Lawyers would be suing the phone company because one or another of their clients did something stupid and/or careless and fell off the telephone wire because, of course, it couldn’t possibly be their own fault.
No matter what, two thirds of the people on the wire would now be considered overweight and the wire would eventually give out, knocking off everyone who still remains.
On the way down, Obama will find a way to blame George Bush for the wire’s collapse.
So, after a short period of time, they’d be no more wire and no one left to sit on it.
Then we’ll have to start all over again, from the beginning… back to a time long before telephone poles and wires.