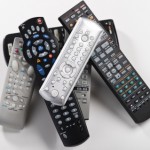 I have so many remote controls, it’s ridiculous…
I have a remote control for the TV… another remote for the cable box and another for the Home Theater system… there’s one for my DVD player… and also a remote for the CD player.
It’s confusing… I can’t keep them all straight.
A few years ago, in 2012, I renovated my living room and got a brand-new, wide-screen, high-definition television.
The first time I was watching my new high-def TV, I was in my living room, viewing the news coverage of Hurricane Sandy that was battering the coastline of the Northeast United States.
I had the remote in my hand while I was talking to my friend on the phone and he asked me what I was doing.
I told my buddy on the other end, “I’m watching the live coverage of Hurricane Sandy from New Jersey and you not going to believe me… in fact, you’re going to think I’m out of my mind… but, my right hand to God, the quality of the picture on this new high-definition TV is so incredibly realistic, I swear I can actually feel the winds from the hurricane blowing right through my living room.”
My friend laughed and said, “Ha ha! What the hell are you smoking, Paul? A TV can’t do that.”
I said, “I thought so too, but I swear to you on my life, I am not kidding! … I am telling you, the resolution on this new TV screen is so convincing I can feel a distinct breeze coming from the storm.”
“You’re losing your mind, Paul. That’s impossible.”
“I’m not making this up! Every now and then they’ll show the hurricane winds blowing on my new TV and then, at about the same time, I’ll get hit with a corresponding blast of air on my living room couch.”
“I’m sorry to disappoint you, Paul, but the technology is not that advanced yet. There has to be a reasonable explanation for it.”
“Well, I’m not imagining it… and, if you don’t believe me, come over and see for yourself.”
I pressed another button on the remote control and said… “Every time I… THERE! I TOLD YOU! THERE IT IS! HOLY SHIT, IT JUST HAPPENED AGAIN! SEE THAT? YOU DIDN’T BELIEVE ME!!”
“What happened, Paul?”
“I was playing with the remote again and, just like I told you, I just felt another gust of wind coming from the New Jersey shore… and I did NOT dream that! I felt it, clear as day!”
That’s when I looked down and realized that I was mistakenly holding the remote control for my new ceiling fan.
“Uhhh, forget everything I just said… I gotta go, bye.” (click)
If that wasn’t enough, I recently added yet another remote control to my collection.
This one is for my new air-conditioner.
One night I came home after having a couple drinks. I was sitting on the couch and grabbed the remote for my television… but I looked down and realized that I had actually picked-up the remote for my air-conditioning unit.
I was bored, so I wondered what would happen if I pointed the air-conditioner remote at my TV set.
The A/C had five different temperature settings, so I aimed the remote control at the TV and hit the first button that said COOL.
I got a commercial for Klondike ice-cream bars.
I shrugged and thought to myself, “Hmmmm, that’s interesting. Those are cool… but it really doesn’t prove anything.”
So I pressed the next temperature control button.
This one was labeled COOLER… and I got the movie, ‘The Big Chill.’
Hmmmm. Strange for sure, but I still wasn’t convinced there was any correlation.
I thought, “It’s gotta just be a coincidence” but, at this point, my curiosity was aroused and I pushed the next button on the remote that said COLD.
This time the TV turned to that animated Christmas special where Rudolph was prancing around in the snow going, “She thinks I’m cute!… She thinks I’m cute!”
Now I’m scratching my head and contemplating, “Why is that Christmas show on in the middle of July? This is getting a little weird.”
I had two settings left, so I pointed the A/C remote at my TV again and hit the button that said VERY COLD.
When I did, I got a documentary about Mount Everest. An expedition of mountain climbers was stuck in a raging blizzard on the side of the mountain, enduring bitter temperatures as they huddled against the howling, icy winds.
“Whoa, that’s definitely something that’s ‘very cold.’ This is truly bizarre!”
Finally, I hit the last button on the air conditioner’s remote control.
This was the one that read, MAXIMUM / FRIGID.
Wouldn’t you know it? I got a press conference featuring Hillary Clinton!
Brrrrrrrrrrrrrrrrrrrrrrrrrrrrrrrrrrrrr!
Whoaaa… Now THAT’S chilly!