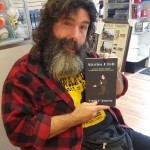 ‘Who’s Reading My Book?’ #26 features WWE Hall of Fame wrestler Mick Foley, often referred to as ‘The Hardcore Legend.’
Mick is a four-time world champion, winning three WWF Championships and one TNA World Heavyweight Championship. He is also an eleven-time world tag-team champion, a THA Legends Champion, and a WWF Hardcore Champion who has wrestled under his real name as well as Dude Love, Cactus Jack, and Mankind. 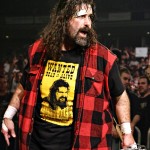 Mick has been in the ring with many other legendary wrestlers including The Rock, Stone Cold Steve Austin, John Cena, Ric Flair, Randy Orton and The Undertaker.
Now in ‘semi-retirement’ Mick is also a best-selling author and a successful actor who has worked as a referee and color commentator, as well as serving as the commissioner of the WWF for one year. He is currently hitting the club circuit as a stand-up comedian. Hecklers beware!
Follow Mick on Facebook at https://www.facebook.com/RealMickFoley
See why everyone is reading and raving about Paul D’Angelo’s hilarious new book ‘Stories I Tell,’ a global Gold Medal Winner of the 2015 eLit Book Awards, a Finalist in the 2015 International Book Awards and voted Honorable Mention in the 2015 New York Book Festival..
You can buy the book at Paul’s web-site: www.pdangelo.com
or on Amazon.com at Paul’s author page: http://amzn.com/069229435X
Thanks to my friend Phil Castinetti of Sportsworld on Route #1 in Peabody, MA.
If you’re holding a benefit or fundraiser contact Phil at (781) 233-7222 to help you raise money for your cause with a charity auction of sports memorabilia
http://sportsworld-usa.com